Dennis Roche
Mar 7, 2021
This week the percent of students attending "virtual" schools dropped to under 25% on a national level. "Always Virtual" regions are returning their students in hybrid, but within the regions that have been hybrid since the Fall we are seeing a shift to traditional, in particular for K-5. The percent of K-5 students attending traditional schools now sits at 57%.
Burbio School Opening Tracker- Now Including State Averages

% US K-12 students attending "virtual-only" schools = 23.7% (from 27.5% last week)
% US K-12 students attending "traditional" In-person/every day" schools = 46.9% (from 44.7%)
% US K-12 students attending "hybrid" schools = 29.4% (from 27.8%)
The above percentages are set to Sunday, March 6th. Our data is presented as "students attending schools that offer this learning plan" - most districts also offer virtual even when providing in-person. For above, 23.7% of US K-12 students are currently attending schools that offer virtual-only plans, 46.9% offering traditional, etc.
1) The number of US K-12 students attending virtual only schools started at a high of 62% at Labor Day, dropped to just under 37% by early November, and rose back to 55% the first week after the New Year due to rising Covid 19 rates. Since then we have seen a near-universal return of schools that were in-person as of November plus a gradual return of parts of the country that had been "Always Virtual" (never had students in the classroom) and the national "virtual" number is at its lowest point since we began tracking at 23.7%.
2) Since the New Year we have seen state level mandates around in-person learning in places such as Iowa and West Virginia have a quick impact. This week in Arizona the Governor ordered schools in 12 of the state's 15 counties to reopen for in-person learning by March 15th or after Spring Break, and Pendergast School District's website now notes they are moving to in-person. In Nevada, the Governor made adjustments to social distancing requirements between high school students (from 6 feet to 3 feet) and Elko County, NV is moving to traditional. The Massachusetts Education Commissioner on Friday gained authority to bring K-5 students in traditional learning by early April. In Kentucky, late Thursday the Governor signed a bill requiring all schools in the state to have in-person learning by March 29th. On a longer timeline, in Oregon, one of the US states with the least in-person learning, Governor Kate Brown issued an executive order to return K-5 students to the classroom by at least the week of March 29th and grades K-12 by at least the week of April 19th, six weeks from now.
3) Also this week California Governor Newsom announced a $6.6 billion dollar package to incent schools to open at least K-2 in hybrid by the end of March if local health metrics allow. California currently sits last in our state in-person index. Most of the state's large districts have no plans to return students in March. With over ten percent of the US population, the state's incremental and highly contested plans for in-person K-12 learning will weigh down national averages for the near future. Some districts are moving forward; for example Novato School District in Marin County plans to complete K-12 transition in the next two weeks and Poway Unified in San Diego is hopeful about adding 6-12 in mid-March. In general, "Always Virtual" CA districts returning students have long phase-ins and their announcements contain abundant qualifying language. Examples include Santa Barbara, CA, which began a return of elementary in hybrid this week as did Corona-Norco School District in Riverside County. Upland School District in San Bernardino County plans a March 16th in-person introduction, Long Beach, CA a March 29 introduction, while Bakersfield, CA announced a "tentative" return in April in this highly cautionary note.
4) In cities and large districts, Las Vegas, NV began hybrid instruction of grade K-3. In a quick transition, Dayton, OH schools, which had been virtual for all but a short period this year, welcomed all students back in traditional learning amid a relatively low opt-out rate of 25%. Also in Ohio, Akron schools moved their in-person transition up a week to March 8th, with all students back the week of March 15th, after public pressure from Governor DeWine. while Columbus, OH announced the March schedule for grades 6-12 returning to the classroom. Clayton County, GA, a top 200 district outside of Atlanta, announced a long phase-in that won't begin until mid-April. Philadelphia's plan is currently limited to a March-long transition for K-2 students to hybrid. Pennsylvania has several cities (Scranton, Allentown, Reading, Pittsburgh) virtual at least through April.
5) We saw transitions to traditional across the US, including Peoria, IL, North Olmstead, OH, Monongalia County, WV Warren County, KY, Lafayette Parish, LA, and Wichita, KS. White Plains, NY announced a transition to traditional over the next month. In Connecticut, Hartford moved K-9 students to traditional and Stamford, CT, announced a K-8 transition to traditional over the next two weeks. The Stamford announcement includes this: "In order to bring back our hybrid students 5 days a week, please know that students will be less than six feet apart in most classrooms. We will follow all CDC recommendations, which include: 'K-12 schools open for full in-person instruction physical distancing of 6 feet or more to the greatest extent possible.'”
6) We are seeing announced plans for five days a week learning this Fall from districts in states that have been virtual or hybrid big chunks of this past year. Boulder, CO, Catawba County, NC and West Bloomfield, MI being recent examples.
7) By grade level, less than 20% of K-5 students now attend "virtual only" schools. With a drop of almost five percentage points since last week those figures are driving the overall drop nationally. We expect to see a continued drop in K-5 'virtual' figures and a rise in the K-5 'traditional' figures due to hybrid transitions as a defining characteristic of March. The outlook for Grades 6-12 is much murkier. Many 'Always Virtual' areas still have no plans in place to return these students and are prioritizing this group last. 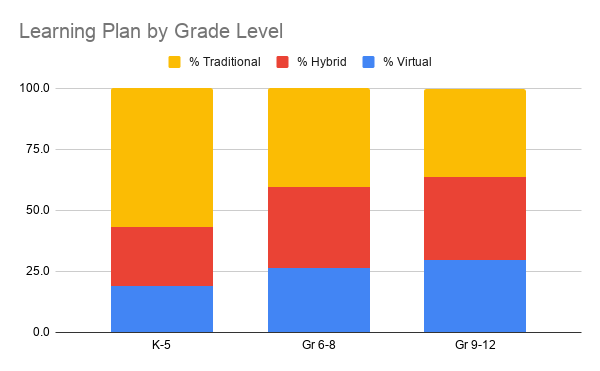