% US K-12 students attending "virtual-only" schools = 27.5% (from 31.1% last week)
% US K-12 students attending "traditional" In-person/every day" schools = 44.7%
% US K-12 students attending "hybrid" schools = 27.8%
The above percentages are set to Sunday, February 28th. Our data is presented as "students attending schools that offer this learning plan" - most districts also offer virtual even when providing in-person. For above, 27.5% of US K-12 students are currently attending schools that offer virtual-only plans, 44.7% offering traditional, etc.
1) The number of US K-12 students attending virtual only schools started at a high of 62% at Labor Day, dropped to just under 37% by early November, and rose back to 55% the first week after the New Year due to rising Covid 19 rates. Since then we have seen a near-universal return of schools that were in-person as of November plus a gradual return of parts of the country that had been "Always Virtual" (never had students in the classroom) and the national "virtual" number is at its lowest point since we began tracking at 27.5%.
2) In "Always Virtual" regions Santa Fe, NM, where K-5 had been virtual since Thanksgiving and 6-12 had never been in the classroom, all came back hybrid this past week. Medford, OR brought in K-3 for the first time. Anne Arundel, MD is one of many Maryland districts introducing in-person beginning this week. Similarly, Arlington, VA is one of many districts in VA introducing in-person in early March. In-person openings in Maryland and continued in-person introduction in Virginia in the next two weeks may result in us shifting how we categorize states and their challenges for the remainder of the academic year. The West Coast is still moving very slowly. One state worth noting that appears to be stuck in neutral is New Jersey, a state with many smaller cities (Elizabeth, Paterson, Newark, Jersey City, to name a few) that are virtual with no plans to return until April at the earliest.
3) In state level activity the Massachusetts Education Secretary announced a goal of having all K-5 students offered traditional in-person by April. West Virginia's Board of Education is requiring five day a week education by March 3rd - this coming week - while allowing hybrid for high school students in areas where Covid 19 levels are high. On Friday North Carolina Governor Cooper vetoed a bill requiring in-person learning state-wide, setting up what media outlets are calling a "showdown" with the legislature over the issue. A Virginia bill requiring in-person learning in all schools by July passed overwhelmingly in one state legislature and is expected to pass in the other. Both the North Carolina and Virginia legislatures are addressing summer school as well.
4) In the Fall when districts introduced in-person for the first time it tended to be over no more than a two week period and included all students. In the "Always Virtual" areas many districts have what we are calling "The Long Phase-In" for introducing in-person learning. Tacoma, WA is introducing grades 3-12 over the month of March. Jefferson County, KY plans on starting March 16th and bringing in 6-12 three weeks later. Baltimore's plan will take seven weeks. Boston's plan, scheduled to start this week is one month long. Ann Arbor, MI announced a plan that starts March 25th and plans to "begin phased 6-12" (their words) beginning April 12th. Pendleton, OR this week brought in younger students and has a long, indefinite timeline for returning older ones. Similarly the plan recently begun in Minneapolis goes well into April. We do see the opposite, on occasion: Gary, Indiana, virtual since March 2020, brought all students back at once this past week.
5) In large city activity, in addition to Baltimore, Boston and Minneapolis (linked above), New York City brought in middle school students offering a mix of hybrid and traditional depending on the school. New Orleans returned high school students to the classroom; they had been virtual since the New Year. Similarly Cincinnati brought in older students, completing a phased introduction begun earlier this month. Nashville, where weather delayed plans, brought in some middle school students this past week and will have all middle and high school students in by this week. Tulsa began bringing students in this week. Birmingham, AL is now bringing students in early this month. Toledo, OH brought younger students in this past week and will bring in all students this coming week.
6) We plan on updating our K-5, 6-8 and 9-12 figures weekly for the near future. Less than 25% of K-5 students now attend "virtual only" schools. We saw a big drop in 6-8 virtual-only - 34.6% to 29.0%, or 5.6% percentage points - which reflects the various phased approaches we are seeing where 6-8 goes into the classroom after K-5 begins. Well under half of 6-8 students have access to traditional in-person learning, which is one of many data points that indicate how far from normal the current academic year remains. 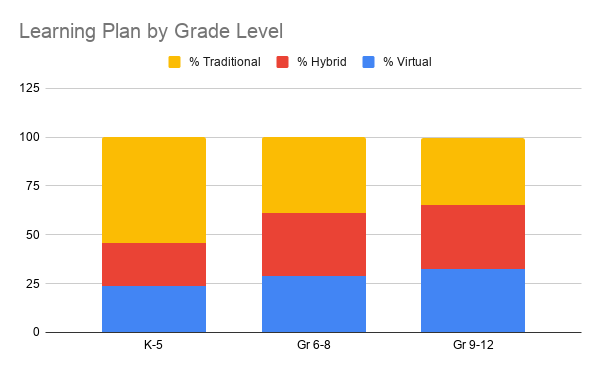