Dennis Roche
Apr 4, 2021
The percent of K-12 students attending traditional schools increased this week as both virtual and hybrid declined for the second straight week, driven by traditional transitions in grades 6-12. With over 30% of US students attending hybrid schools, this week we take a look at states where that format predominates.
.
Burbio School Opening Tracker- Now Including State Averages
% US K-12 students attending "virtual-only" schools = 14.4% (from 16.3% last week)
% US K-12 students attending "traditional" in-person/every day" schools = 55.3% (from 53.1%)
% US K-12 students attending "hybrid" schools = 30.3% (from 30.6%)
The above percentages are set to Sunday, April 4th. Our data is presented as "students attending schools that offer this learning plan" - most districts also offer virtual even when providing in-person. For above, 14.4% of US K-12 students are currently attending schools that offer virtual-only plans, 55.3% offering traditional, etc.
1) We continued to see reactions to the CDC guidance shift from 6 feet to 3 feet.
2) Some districts are warning three feet is still too much distance to accommodate traditional in-person. West Orange, NJ mentions concerns in this letter, and Indian River School District in Delaware notes, "Due to a high percentage of families opting for in-person instruction at our elementary and middle schools, we are unable to combine cohorts with the current three (3) feet social distancing guidelines." Kenmore-Tonawanda, NY cites spacing issues in buses and the cafeteria around 3 foot rules even as it waits for NY state guidance. Given the percentage of parents opting to keep their children at home in many districts across the U.S. - who presumably would return next year, but whose absence creates more room in classrooms this year - these notes raise the question of whether three feet spacing will be enough for some districts to offer traditional next year.
3) In state and city news, New Hampshire Governor Sununu announced all New Hampshire schools need to be open for in-person five days a week by April 19th. A bill moving in the Kansas state legislature requiring in-person learning is cited in the Kansas City, KS schools move to traditional. Governor Cooper in North Carolina signed a law requiring in person learning and we see many districts in that state moving to in-person the week of 4/12. In cities, Duluth, MN has moved to traditional, as has Springfield, IL. Pittsburgh will begin a month-long return of students that starts next week and goes into May. Examples of districts staying virtual include Paterson, NJ, which reiterated a decision to stay virtual indefinitely, while Fremont, CA schools will stay remote for the balance of the year, citing a labor impasse.

4) With pockets of virtual-only learning dropping to some urban areas and big chunks of the West Coast, we wanted to focus on states with hybrid learning. As noted, the past two weeks have seen a small drop in hybrid learning nationally, but we are showing 30.3% of the US K-12 population - which would total approximately 15MM students - attending schools that offer that format. Below is the breakdown of states by percentage of K-12 students attending hybrid schools:

5) After this week over 50% of 6-8 students are now attending traditional in-person learning, as high school students nationally approach that threshold as well. 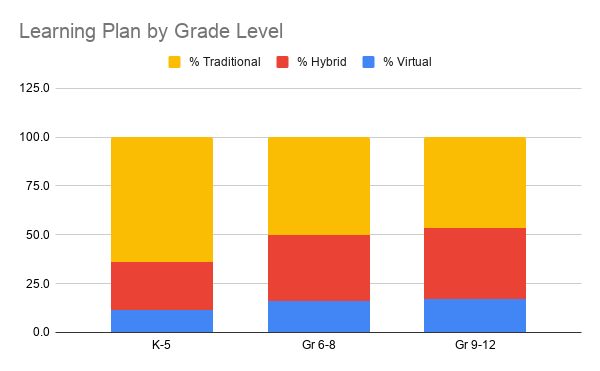