We saw a 4.1% increase in the percentage of K-12 students attending traditional school this week as both virtual and hybrid continued to drop. The percentage of K-5 students in virtual dropped below 10% and the percent of high school students attending traditional schools went above 50%. Several states saw in-person jumps due to state level mandates. And for millions of US K-12 students, the school year is weeks away from coming to a close.

Dennis Roche
Apr 11, 2021
We saw a 4.1% increase in the percentage of K-12 students attending traditional school this week as both virtual and hybrid continued to drop. The percentage of K-5 students in virtual dropped below 10% and the percent of high school students attending traditional schools went above 50%. Several states saw in-person jumps due to state level mandates. And for millions of US K-12 students, the school year is weeks away from coming to a close. More below.
. .
Burbio School Opening Tracker- Now Including State Averages
% US K-12 students attending "virtual-only" schools = 12.2% (from 14.4% last week)
% US K-12 students attending "traditional" in-person/every day" schools = 59.4% (from 55.3%)
% US K-12 students attending "hybrid" schools = 28.4% (from 30.3%)
The above percentages are set to Sunday, April 11th. Our data is presented as "students attending schools that offer this learning plan" - most districts also offer virtual even when providing in-person. For above, 12.2% of US K-12 students are currently attending schools that offer virtual-only plans, 59.4% offering traditional, etc.
1) Some large "Always Virtual" cities are bringing students in for the first time.
2) At the state level, New Mexico went from one of the most virtual states to one of the most in-person as seen on our School Opening Tracker as state mandates kicked in. Massachusetts figures took a big jump as their K-5 in-person requirements took effect. Next week we expect North Carolina, currently much further along in offering in-person, to make a big shift, and the week after that New Hampshire will as well based on similar mandates. Oregon, California, and Washington will jump considerably with many returns occurring the weeks of the 12th and the 19th, although in those states most returns are hybrid. Conversely, Michigan Governor Whitmer urged high schools in the state to go virtual for two weeks due to rising Covid-19 rates.
3) In noted moves to traditional, Fairfax, VA will offer traditional to all students April 20th, Wake County, NC completed a move to traditional this week, and Rochester, MN moved middle and high school to traditional this week. Montgomery went from virtual to traditional and Birmingham, AL completed a move to traditional from hybrid, as did U46 in Elgin, IL,.
4) In addition to the School Opening Tracker, Burbio's service aggregates and auto-updates 80,000+ K-12 public school calendars representing over 90% of the US K-12 student population and can analyze start dates, end dates, vacations, and more. This week we look at when students will be done with school this academic year. We found that almost half of K-12 students will be done with school before Memorial Day and fully 75% by June 12th. 5) The K-5 virtual number will drop to almost zero by the end of this month as all but a handful of districts across the US open K-5 at least in hybrid. We expect grades 6-12 to remain significantly more 'hybrid' than K-5, and slightly more virtual, as most of the remaining "Always Virtual" districts do have some sort of 6-12 opening plans on their schedule. Remaining "virtual" districts through the end of the year consist of a few mid-size cities and inner-ring suburbs in a handful of states. Hybrid districts will be concentrated on the West coast, pockets of the Northeast from Maryland on up, and big cities across the Midwest and Northeast. It's not clear right now how low the national hybrid numbers will drop, as "Always Virtual' districts are returning in hybrid - bumping that number up - and many "conversions to traditional" among current hybrid districts should occur in the next two weeks (with the end of Spring break) if they are going to occur at all this year. The biggest issue for next Fall, as noted in last week's report, is what happens to educational offerings if and when 80-90% (if not more) of the students choose to be in-person, as the current 3 foot guidelines appear to create issues in certain districts around lunchtime, bussing and classroom space. 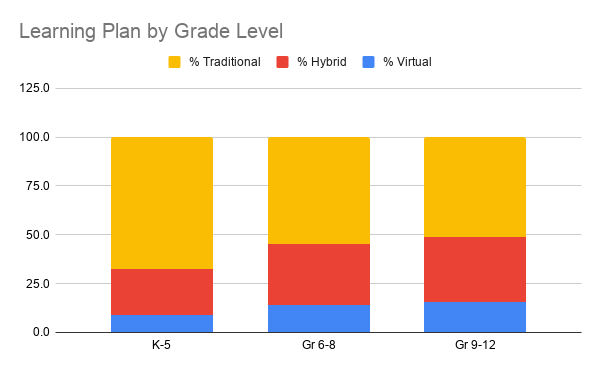