This week the number of K-12 students attending virtual-only schools dropped below one-third for the first time as "Always Virtual" regions continued a gradual return. Over fifty percent of K-5 students are now attending schools that offer traditional, in-person learning. In addition, Burbio has launched a CDC School Opening Zone tracker that shows the percentage of students living in red zones (76% through February 20th) to go with our School Opening Tracker.

% US K-12 students attending "virtual-only" schools = 31.1% (from 33.6% last week)
% US K-12 students attending "traditional" In-person/every day" schools = 42.6%
% US K-12 students attending "hybrid" schools = 26.3%
The above percentages are set to Sunday, February 21st. Our data is presented as "students attending schools that offer this learning plan" - most districts also offer virtual even when providing in-person. For above, 31.1% of US K-12 students are currently attending schools that offer virtual-only plans, 42.6% offering traditional, etc.
1) The number of US K-12 students attending virtual only schools started at a high of 62% at Labor Day, dropped to just under 37% by early November, and rose back to 55% the first week after the New Year due to Covid 19 rates rising in the Northeast and Midwest. Since then we have seen an almost-universal return of schools that were in-person as of November plus a gradual return of parts of the country that had been "Always Virtual" (never had students in the classroom) and the national "Virtual" number is at its lowest point since we began tracking at 31.1%.
2) In districts and regions that have been "Always Virtual" this year, Cleveland announced plans to return students into the classroom in March in a hybrid format, with high school students by the end of March. Akron, OH, with plans to complete staff vaccinations by early March, is planning on an in-person return during that month. Fairfax County, VA is returning special needs students this month and younger students in March, and Henrico County, VA returned younger students this month as Virginia's openings increase. In Maryland Anne Arundel County plans on returning all students during March while Prince George's County, MD set a date of April. Conversely, Kalamazoo, MI announced they will stay virtual for the balance of the year. Philadelphia pushed back in-person learning until at least March 1st amid labor negotiations. Reports out of Pittsburgh indicate the Board will consider postponing a return for the balance of the school year. We see returns coming next week across New Mexico, Oregon, Washington, Tennessee and Minnesota.
3) In extended learning trends, Ohio Governor Dewine gave an April deadline for schools to submit plans to address learning loss that could include extending the school year, starting next year early, summer programs, virtual learning, or extending the school day. In Kingsway School District, NJ they are offering blended and virtual options for juniors and seniors next year. This media report out of Minnesota indicates the state is set to approve dozens of district level online programs that would be open to residents state-wide. Midland County, TX is offering multiple school calendars for 2021-22.
4) With the short week, winter break in many districts, and difficult weather in much of the country we didn't see much local reaction to the new CDC Guidelines in district communications. This piece from NPR is a good overview of some of the issues created by the guidelines, among them an emphasis on six foot distancing and the creation of a zone system. Burbio has launched a CDC School Opening Zone Tracker that as of February 20th shows 76% of the country in the red zone, under which CDC Guidelines place considerable constraints on in-person learning of all ages. The percent of the US in the red zone is dropping due to declining Covid 19 rates around the country. 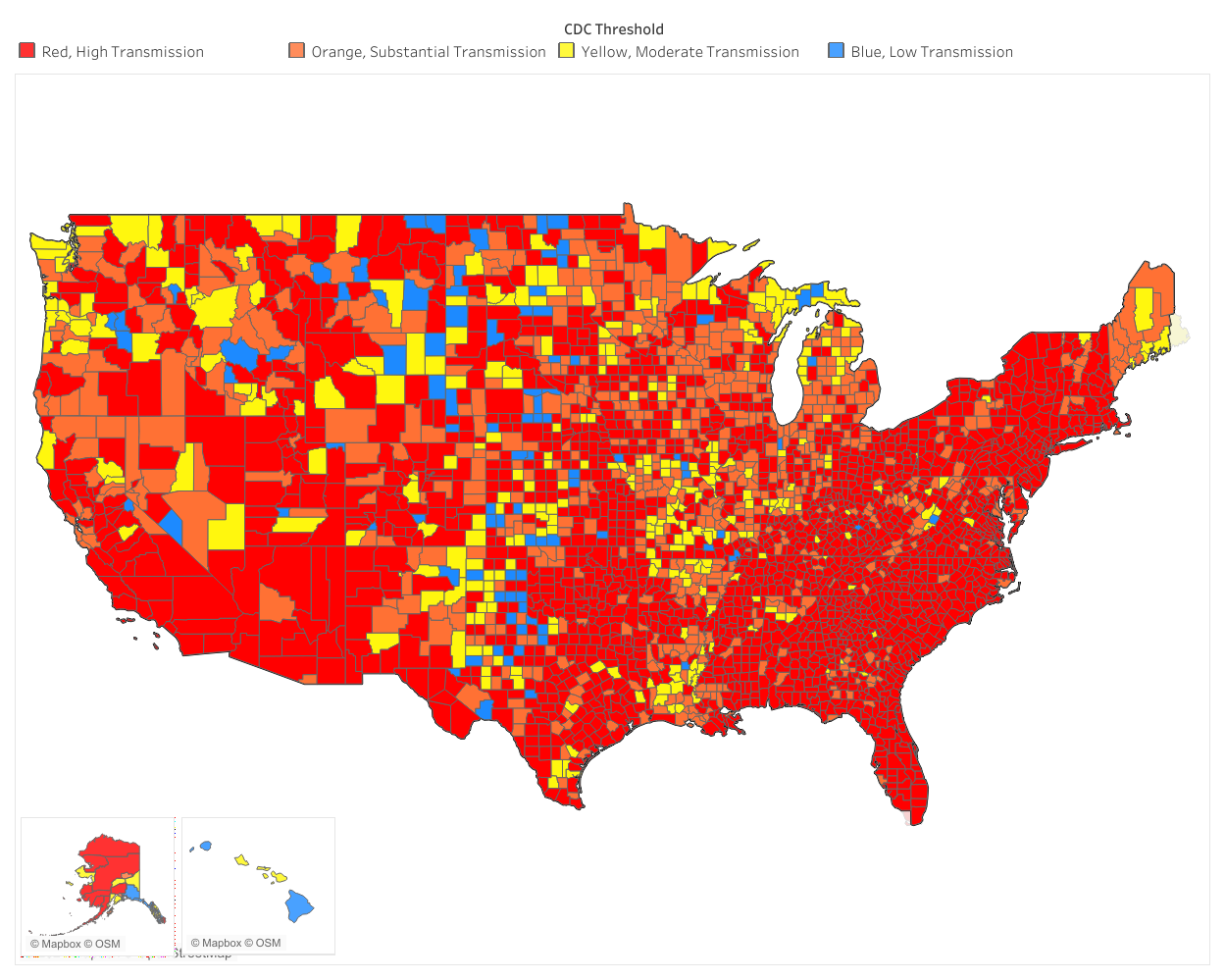 5) As noted each week at the top of our newsletters, Burbio's data tracks "students attending schools offering this learning plan" as most districts offer the ability to opt-out of in-person learning. These figures are not widely reported, and they can typically be found only on bigger district websites. Numbers for large cities range from fifty to seventy-five percent of students staying virtual. Example figures outside of large cities include Humble, TX (23%) , New London, CT (K-5 39% 6-12 44%) Gary, IN (54%), Flushing, MI (27%), Rockaway, NJ (12-30% range by school) Des Moines, IA (35%), Plymouth, MA (8%), Mayfield, OH (32.3%), Beaufort, SC (38%), Indian River, FL (21%), Chesapeake, VA (42%), Jefferson County, KY (40%).
Interestingly, higher opt-out rates make it easier to offer traditional in-person learning because with fewer students it is easier to meet social distancing requirements. For example with only 52% of students choosing in-person learning, District 54 in Schaumburg IL chose 'traditional' in person learning because it has space. The sheer size of the in-person opt-out percentages this far into the school year across every state raise questions about parental preferences even after vaccines are widely available to the adult population.
6) We last updated our grade level splits two weeks ago. Over half of K-5 students are now attending schools that offer traditional in-person learning. What is interesting is the drop off in in-person learning from K-5 to 6-8, and the similarity between 6-8 and 9-12. That gap may shift in the coming weeks as the many "Always Virtual" districts that bring K-5 students in the classroom initially bring in middle school students but it's worth noting. 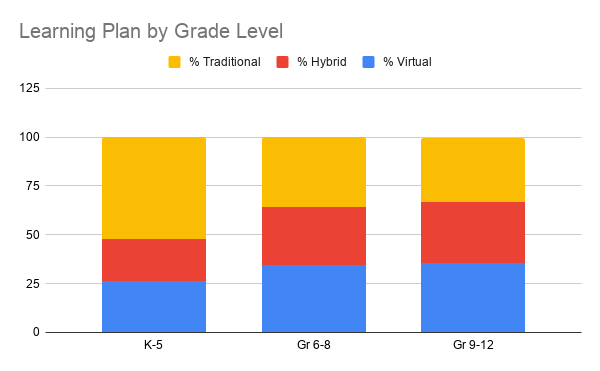