This week the virtual-only figure took another drop as now 5.6% of all K-12 students are attending virtual-only schools. This week we examine the places where K-5 schools are still virtual, take a look at the developing landscape for virtual learning in the Fall of 2021, and review the shifting landscape of start dates for Fall 2021.

Dennis Roche
Apr 25, 2021
This week the virtual-only figure took another drop as now 5.6% of all K-12 students are attending virtual-only schools. This week we examine the places where K-5 schools are still virtual, take a look at the developing landscape for virtual learning in the Fall of 2021, and review the shifting landscape of start dates for Fall 2021.
Burbio School Opening Tracker- Now Including State Averages
% US K-12 students attending "virtual-only" schools = 5.6% (from 9.4% last week)
% US K-12 students attending "traditional" in-person/every day" schools = 65.3% (from 62.4%)
% US K-12 students attending "hybrid" schools = 29.1% (from 28.2%)
The above percentages are set to Sunday, April 25th. Our data is presented as "students attending schools that offer this learning plan" - most districts also offer virtual even when providing in-person. For above, 5.6% of US K-12 students are currently attending schools that offer virtual-only plans, 65.3% offering traditional, etc.
1) Only a handful of districts nationally have K-5 students still virtual-only at this point in the year with only 2.7% (see below) of all K-5 students attending virtual-only districts. With comprehensive reopening plans across the Sun Belt and the Rockies in the Fall, and a series of executive actions to mandate K-5 openings since the New Year in many other states, the K-5 virtual districts remaining are in only a handful of states. Burbio audits districts representing 47% of all US K-12 students. Below is a snapshot of districts committed to being virtual for the year. It is important to note several districts (not included below) have announced plans for K-5 in-person in the next two weeks, and a few others have situations that remain fluid.
2) The virtual learning landscape for the Fall of 2021 is still forming as districts of different sizes begin to make plans. We expect this situation to remain fluid but given the number of approaches we are seeing we wanted to highlight some early observations:
3) In two interesting data points related to interest in virtual options, in Gwinnett County, GA, the state's largest district, just over 2% of all students have opted for virtual next Fall. Conversely, Barrington, IL reported 25% of parents preferring a virtual option for the Fall of 2021, but the survey was done in February and March and the district is going to re-canvas those parents and ask for a full year commitment to virtual as part of planning.
4) In addition to our School Tracker audit service, Burbio's runs a data service that aggregates over 80,000 K-12 school calendars representing over 90% of US K-12 public schools, The calendars are dynamically updated and pick up signals about all manner of school activities. Below, we identify changes in the first day of school for Fall 2021 versus 2020. Note that over 40% of districts are shifting their start dates by more than 5 days from the Covid-19 disrupted Fall 2020. 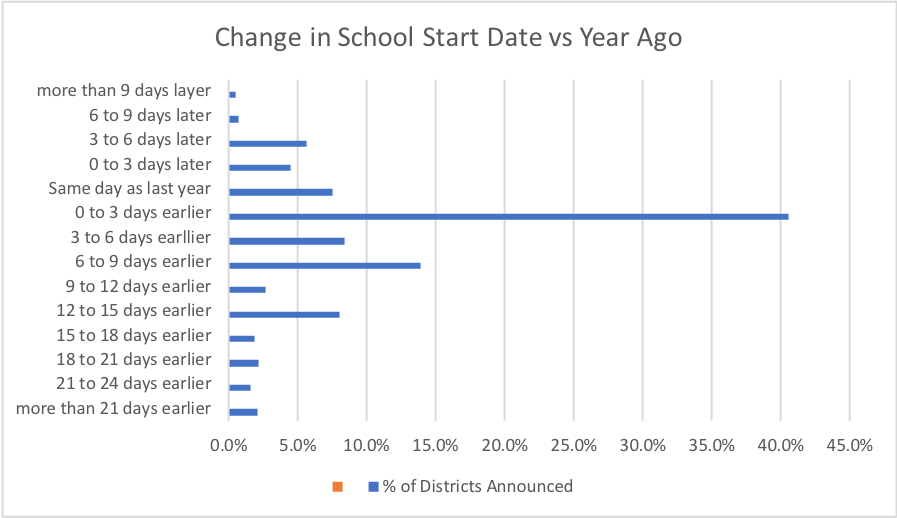 5) As noted above, the percent of K-5 students attending virtual-only districts is approaching zero as only a handful of districts have announced intentions to remain completely virtual all year. Some of the shift away from virtual went to hybrid, as many "Always Virtual" areas are returning K-5 in that mode, even as many hybrid districts across the US convert to traditional. 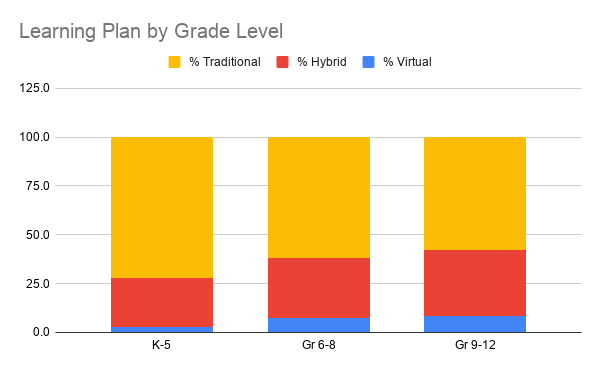 Virtual-only learning rose further above 50 percent this week as additional schools went virtual upon returning from school break.  We expect this to...