Dennis Roche
Apr 18, 2021
Over sixty percent of US K-12 students now attend schools that offer traditional in-person learning and less than ten percent attend virtual only schools as "Always Virtual" districts across the country introduce in-person and hybrid districts continue to move to traditional. This week we also observe some of the more limited definitions of in-person learning and note that NY State's recent adoption of CDC guidelines resulted in some schools reversing in-person learning plans.
. .
Burbio School Opening Tracker- Now Including State Averages
% US K-12 students attending "virtual-only" schools = 9.4% (from 12.2% last week)
% US K-12 students attending "traditional" in-person/every day" schools = 62.4% (from 59.4%)
% US K-12 students attending "hybrid" schools = 28.2% (from 28.4%)
The above percentages are set to Sunday, April 18th. Our data is presented as "students attending schools that offer this learning plan" - most districts also offer virtual even when providing in-person. For above, 9.4% of US K-12 students are currently attending schools that offer virtual-only plans, 62.4% offering traditional, etc.
1) Several large California districts announced intentions for full-time in person next year, but with qualification language and emphasis that is unique to California. .
2) New York adopted new guidance on introducing in-person learning that incorporated both the 3 foot rule but also the CDC Zone Guidelines. that require using 6 feet distancing in middle and high school if Covid 19 rates in a county are at a certain level. As a result, Warwick Valley, NY is pulling middle and high school students out of traditional and into hybrid. Elsewhere, the Superintendent of Port Washington, NY, writes that he is "disheartened to share" that the district's "All-In" plan to bring in grades 6-12 full time is now on hold. Monroe-Woodbury's traditional move for grades 6-12 is also on hold.
3) Even as in-person learning continues to increase this week we thought it appropriate to highlight some variations of in-person we see across the US that offer wrinkles on categories such as traditional and hybrid. Reynolds School District, OR offers between 2.5 and 3 hours of learning a day, two days a week. Ontario School District, OR is offering one hour and forty minutes a day, four days a week. In previous reports we have noted many districts offering four day a week in person and one day remote as a "traditional" offering; in Ridgewood, NJ they now offer every day instruction, but only for four hours a day, as does Mahwah, NJ. In bigger districts, there are building-by-building differences: this link to Washington DC's term 3 plan (they just announced Term 4) is a good example of the variations. Last week we noted that Fairfax, VA was expanding to traditional in-person for students that have been in hybrid; it ends up that a major caveat in the announcement is "where staffing and space capacity allow" as decisions are being made at the individual school level and the offering varies widely.
4) In recent changes to what will be a fluid scheduling situation across the US for the foreseeable future, East St Louis extended the school year by five weeks, to late June, with attendance mandatory for almost all students. North Carolina's House and Senate both passed a bill requiring six weeks of summer school for students who have fallen behind this year. This Sun Sentinel piece outlines expanded summer programs across Florida. East Baton Rouge, LA is adding eight days to next school year and starting the year early. Philadelphia announced expanded summer school and New York City is doing so in combination with its summer camp programs.
5) The logistics of virtual learning options for next Fall are still coming into view around the US. We have previously noted state-wide virtual academies in Iowa and Minnesota. Here Chesterfield County, VA details a county-level virtual program that involves dedicated virtual learning with students from around the county but extracurricular participation at the student's home school, and Bibb County, GA is doing the same. Conversely, in Washington, DC's recent announcement of full time instruction next Fall references only limited virtual options.
6) As the school year begins to wind down, below see a chart showing an average for Burbio's in-person index (IPI) by state since the beginning of the year. Our IPI is calculated by a school districts offering for students, with traditional being 100, virtual being zero, and hybrid being 50. So a state where traditional is offered in every school district, the figure would be 100; for a state with half the students having access to traditional and half to hybrid, it would be 75. We evaluate at the K-5, 6-8 and 9-12 level as those plans vary and our methodology can be found here. Some states have had in-person levels fluctuate as the year goes on and these are the averages.

7) The K-5 virtual figure continues to drop and as we noted last week we expect all but a handful of K-5 students to have access to in person learning of some kind by the end of April. Hybrid learning among K-5 did increase as many of the West Coast districts (some of which are quite large) returned for the first time and began with K-2 or K-5 in hybrid. 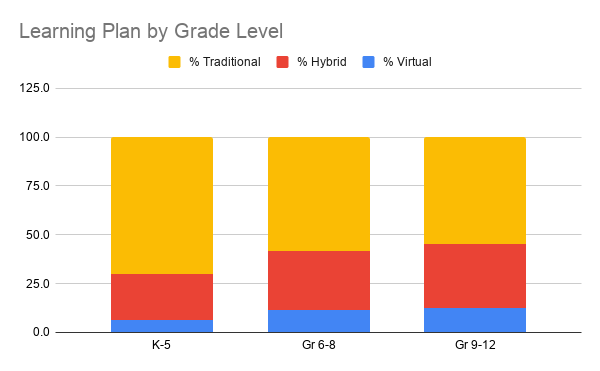 Over half of US K-12 students now attend schools with traditional learning and less than twenty percent attend virtual-only schools. The new 3 feet...