Over half of US K-12 students now attend schools with traditional learning and less than twenty percent attend virtual-only schools. The new 3 feet rule from the CDC will accelerate reopening, in particular conversions to traditional from hybrid, though many districts were already using the three foot standard. This week we introduce a chart showing the percentage of students that are virtual-only by state.

Dennis Roche
Mar 21, 2021
Over half of US K-12 students now attend schools with traditional learning and less than twenty percent attend virtual-only schools. The new 3 feet rule from the CDC will accelerate reopening, in particular conversions to traditional from hybrid, though many districts were already using the three foot standard. This week we introduce a chart showing the percentage of students that are virtual-only by state. More below.
Burbio School Opening Tracker- Now Including State Averages
% US K-12 students attending "virtual-only" schools = 18.1% (from 20.8% last week)
% US K-12 students attending "traditional" in-person/every day" schools = 51.2% (from 49.1%)
% US K-12 students attending "hybrid" schools = 30.7% (from 30.1%)
The above percentages are set to Sunday, March 21st. Our data is presented as "students attending schools that offer this learning plan" - most districts also offer virtual even when providing in-person. For above, 18.1% of US K-12 students are currently attending schools that offer virtual-only plans, 51.2% offering traditional, etc.
1) On Friday the CDC adjusted guidance for physical distance between students to 3 feet from 6 feet. This past week, before the new national guidelines were issued, we saw districts in Michigan, New York, Indiana, Massachusetts, Ohio, Pennsylvania, and Wisconsin using three feet in their plans to convert from hybrid to traditional, plus state level changes to guidance in Illinois. We anticipate the move to three feet will accelerate conversion to traditional as Superintendents routinely reference distancing in those plans and, indeed, on Friday we saw several districts change their existing website announcements to reflect the new CDC Guidance.
2) In large district news, Seattle announced a tentative labor agreement and plans to introduce K-5 and special needs students in April. Portland announced a plan to bring students into classrooms in a hybrid model over the month of April. Albuquerque, NM is going straight to traditional in person for K-12 on April 5, representing a very fast conversion as big districts go. Kansas City, MO brought K-3 hybrid in this past week and will have all students in hybrid by the week of April 5th. Jefferson County, KY, a Top 200 district, brought K-5 in this week and will bring in 6-12 by April 5th. Tucson, AZ will start next week in response to the Governor's mandate. Oakland, CA announced a plan to bring K-2 in by March 30th with an indeterminate timeline for the balance of students.
3) This week we introduce a "virtual only" chart showing the percentage of students in a state that have no access to in-person learning (either traditional or hybrid). As noted over the last month of digests every state has targeted dates for in-person learning over the next six weeks and we expect these figures to drop. California, Oregon, New Mexico and Maryland currently have over half their students attending virtual-only schools. Due to its sheer size, California is currently home to 47.7% of all US K-12 students who attend virtual-only schools.

4) Below is this week's "in-person index" by state. This index is designed to capture "learning time available" to the average K-12 student in the state. We weight a district that offers traditional at 100 percent as students in those districts can access full time school; hybrid is 50 percent, and virtual zero. We see a small number of Midwest/Northeast districts offering four days a week and we grade that traditional. As we note each week, all districts across the US offer the ability to "opt out" of in-person learning and many parents do so.

5) Over sixty percent of K-5 students now attend schools that offer traditional learning which is increasing faster than hybrid across all segments. Hybrid will continue to increase in the coming weeks as "Always Virtual" areas continue to return in a hybrid format even as existing hybrid districts convert to traditional. 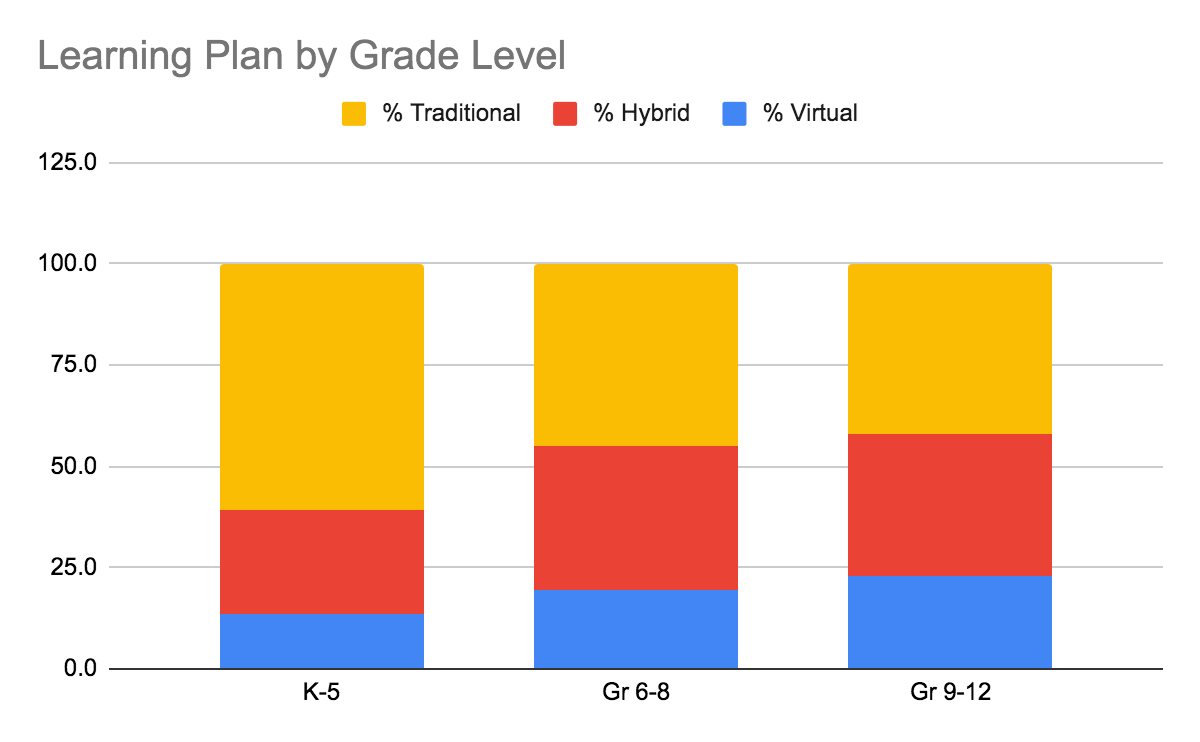