This week the number of K-12 students attending virtual-only schools dropped to its lowest point since we began tracking the index as "Always Virtual" regions of the country gradually open for in-person instruction. We review splits by grade level as well as a new map that rolls up learning plans to the state level.

Dennis Roche
Feb 1, 2021
This week the number of K-12 students attending virtual-only schools dropped to its lowest point since we began tracking the index as "Always Virtual" regions of the country gradually open for in-person instruction. We review splits by grade level as well as a new map that rolls up learning plans to the state level.
Burbio School Opening Tracker- Now Including State Averages

% US K-12 students attending "virtual-only" schools = 35.2% (from 38.2% last week)
% US K-12 students attending "traditional" In-person/every day" schools = 39.7%
% US K-12 students attending "hybrid" schools = 25.1%
The above percentages are set to Sunday, February 7th. Our data is presented as "students attending schools that offer this learning plan" - most districts also offer virtual even when providing in-person. For above, 35.2% of US K-12 students are currently attending schools that offer virtual-only plans, 39.7% offering traditional, etc.
1) During the Fall the number of US K-12 students attending virtual only schools started at a high of 62% at Labor Day, falling gradually to a low of around 37% by early November . Rising Covid-19 rates and precautionary holiday related breaks concentrated in the Midwest and Northeast took that number back up to 55% the first week after the New Year. In the past month we have seen an almost-universal return of schools that were in-person as of November. Further, in the last two weeks parts of the country that had been "Always Virtual" - never had students in the classroom - have started introducing students for the first time and as a result the national "Virtual" number is at its lowest point since we began tracking, at 35.2%.
2) In "Always Virtual" areas, Virginia Governor Northam called on all K-12 schools in Virginia to make in-person learning available by March 15th. Chesterfield County Schools in Virginia returned K-5 students this week as the state begins to gradually open up outside of cities and large districts. Similarly, in Washington state, Mount Baker school district opened for full K-12 hybrid learning as smaller districts in that state begin to open. Erie PA brought students (K-5, hybrid) in for the first time this year as did Warren Consolidated Schools in Michigan (K-2, hybrid).
3) In city news, Milwaukee plans to start in-person learning on April 12th. Lynn, MA pushed in-person back to 4/9 and Springfield, MA pushed back to April 12th. Ann Arbor, MI, in this wide ranging note explains their reasoning for deferring in-person indefinitely. Camden, NJ deferred in-person until at least April 9th. Washington, DC brought a portion of it's students into the classrooms for the first time this academic year. In state level news, besides the Virginia note above, Iowa Governor Reynolds signed a law requiring traditional instruction be an option in schools by February 15. North Carolina's Governor called for schools to open in public comments as a bill passed the State Senate by a large margin to require in-person learning. This week we will be watching New Mexico, where the Governor has allowed schools to open.
4) We saw hybrid to traditional conversions in Tennessee, Wisconsin, and Ohio at a wide variety of grade levels.
5) Summer school offerings and the continuation of virtual-only options in the 2021/22 school year have gone from an "early sighting, maybe it's a trend" in our district level audits a few weeks ago to a flood that indicates a big change in the landscape is coming next year. This past week the Michigan schools chief urged lawmakers to extend the school year next year. This piece out of Minnesota refers to local schools considering expanded summer programs. Dallas is extending next school year and Los Angeles is considering it. Albany, NY plans to have a "robust" virtual program next academic year. Coming out of Covid 19 the way students are educated, how long they attend school, and where they are located while they take classes is going to undergo many changes.
6) Legal and labor action is widespread across the US around school openings. San Francisco sued it's own school district to force a school reopening, and the Superintendent and School Board President responded to charges there was no reopening plan. Buffalo's teachers union is in court suing to stop the city's school reopening, which began this week. Montclair's school district is suing the teachers union to force school reopening. Cincinnati's teacher's union lost a court case trying to stop this weeks' school reopening. The situation in Chicago remains fluid in the midst of highly adversarial negotiations that have stopped their reopening.
7) This week we are introducing an additional national map to illustrate state wide in-person indexes to our School Tracker page and the first issue is below. For this "In-person index" we weight the percent of students in a state with access to traditional education for a student at 100, hybrid at fifty, and virtual at zero and we bucket states by where the average falls; 0-20, 20-40, 40-60, 60-80, and 80-100 to measure their progress to providing all students access to traditional in-person education. 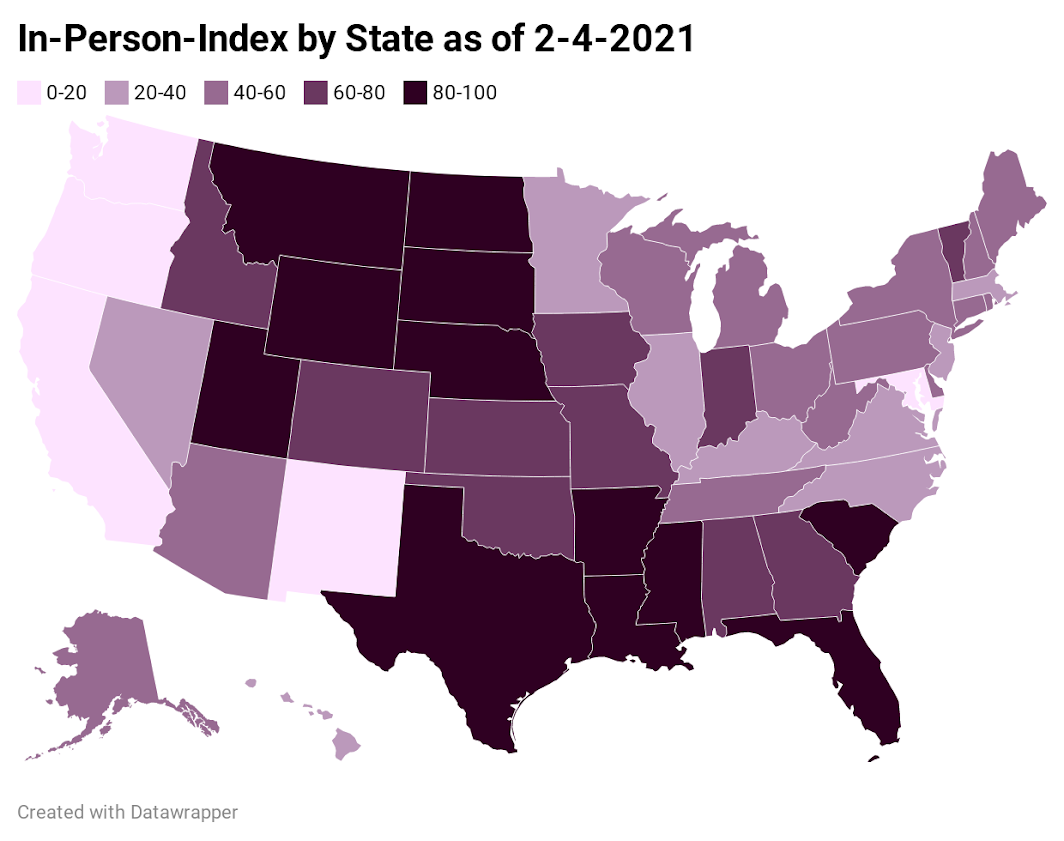 8) Update: Breakdown nationally by school type: We last published this chart two weeks ago and offer an update and comparison below. K-5 students continue to be more likely to be in-person than older children and more likely in a traditional format. We expect this trend to continue as the "Always Virtual" areas that are returning students often start with younger children first, as do the conversions from hybrid to traditional learning we are seeing. 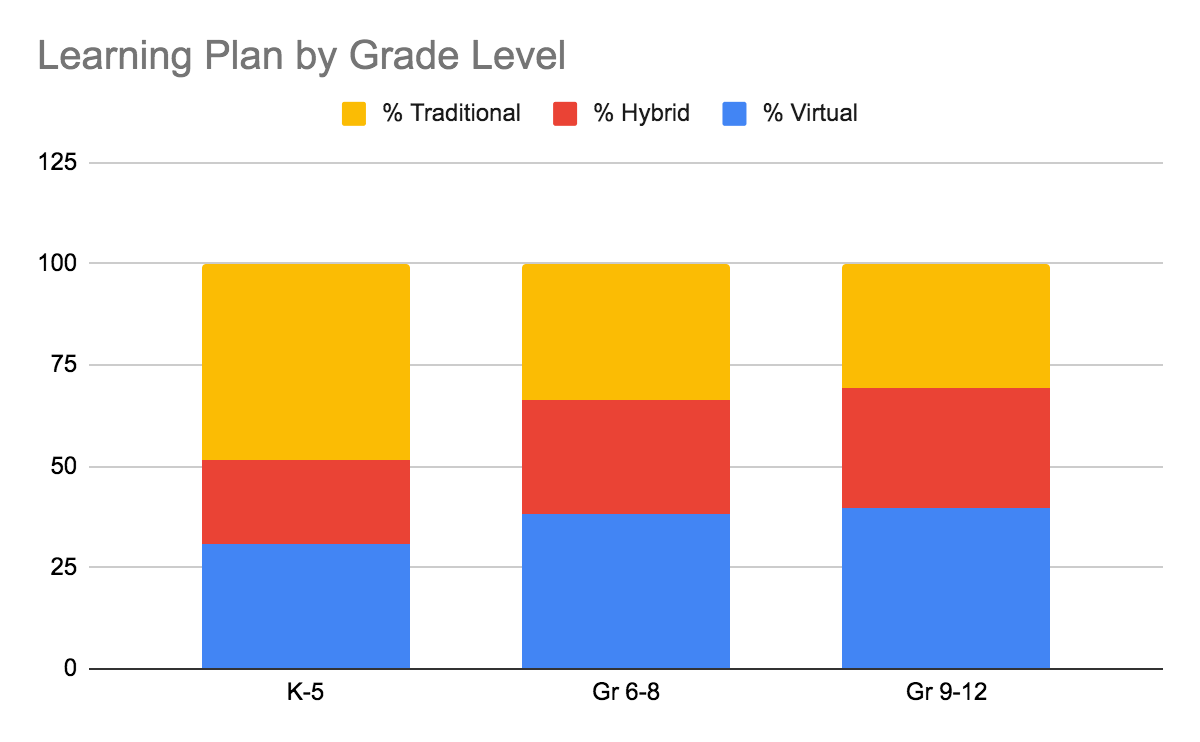 This week we saw the biggest drop in "virtual-only" students since September as many districts returned to in-person learning after precautionary...