Week of 2/1: States of Education

This week 'virtual-only' learning continued to drop, albeit at a slower pace than previous weeks. 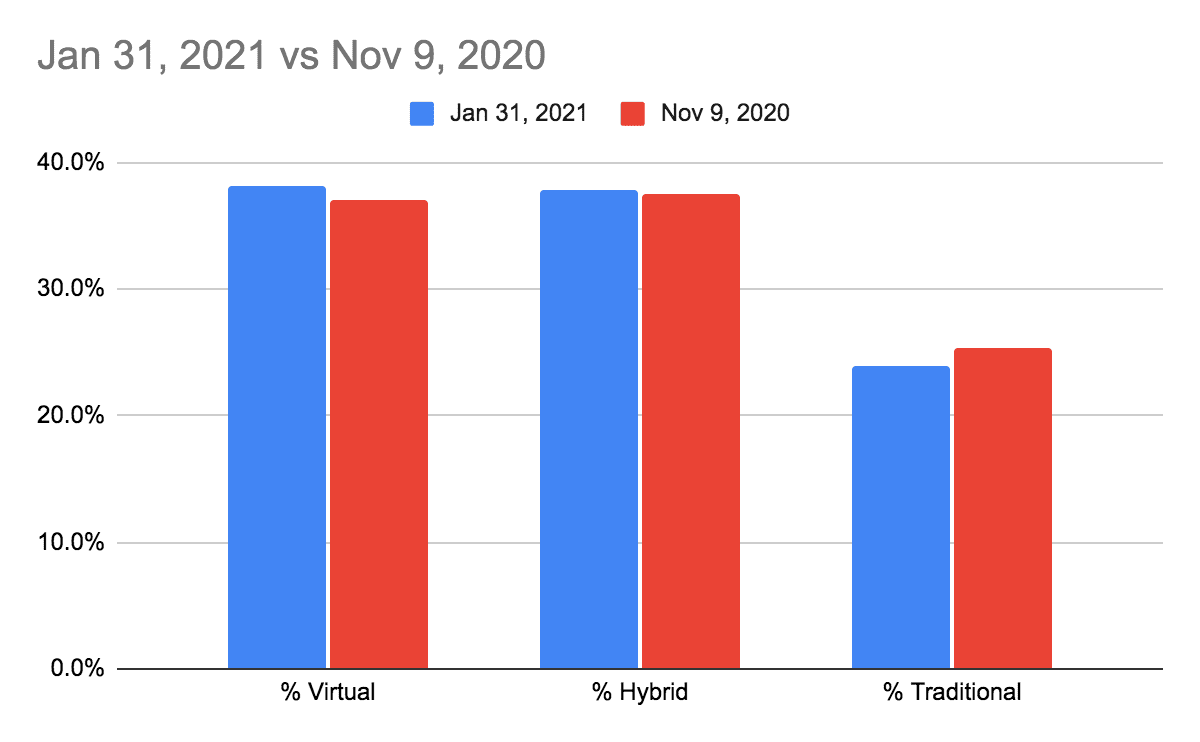 2) This week in several "always virtual" districts we saw reports of vaccinations being tied to reopenings. Bethel, OR school board directed the Superintendent to hold off on in-person instruction until staff is vaccinated as did Clackamas, OR and Washington, OR . In Green Bay, WI school will start in-person education three weeks after staff is vaccinated. Pittsburgh postponed in-person learning until April as the Board President cited teacher vaccinations as a gating factor to return. Passaic, NJ pushed in-person learning back until at least April as the Board president references vaccines in the announcement. Montgomery, AL schools, which have been in and out of virtual this year, will likely be virtual until teachers have the opportunity to be vaccinated.
Three observations struck us from these early views of "post-vaccine" educational plans in areas that have been "always virtual" this year: a) In Oregon the districts reference vaccinations and community spread thresholds being gating factors to reopening b) In Green Bay, the schedule references a post-Spring break "virtual" pause even in the event staff have been vaccinated and returned to the classrooms c) The plans at most of these districts upon return post-vaccine are hybrid.
3) In urban district news, Atlanta, GA broke ground as a big city district that brought K-2 students in, even as this chart posted by the District illustrates that only between twenty-five and forty percent of students are returning in most schools, as in-person "opt-outs" continue to be very high in urban areas. Outside of Pittsburgh's long term postponement, Philadelphia announced a February 22nd start date for K-2. Legal action by teachers in Buffalo threatens student's return this coming week. At the state level, the Governor of New Mexico will allow hybrid learning beginning February 8th and Farmington, NM schools plan to open at that time. In North Carolina legislators. are introducing a bill to require in-person learning.
4) We see references to virtual learning being an option next year in more states. Lincoln, NE is offering a "one year only" virtual program in 2021-22 in light of uncertainty around Covid-19.Sioux City, IA is launching a virtual school for "any student from any school district in Iowa" next year. West Contra, CA school district, with almost 50 schools, will offer a centralized virtual school next year and localized virtual school "if the pandemic is surging in August' according to the Superintendent's note. Riverside, CA is setting up a centralized virtual school as well. In our note on January 18th we noted similar initiatives in Missouri and Minnesota. The trend is clearly taking hold and will have widespread implications across K-12 in the coming years.
5) As noted in our January 25th note there are pronounced differences in how states are handling in-person learning. This week we illustrate three categories: Two large traditional-heavy states, six "always virtual" states, and the Northeast-heavy hybrid. 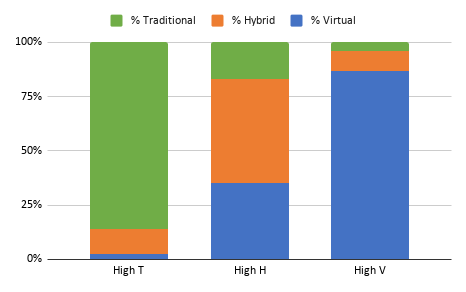 High Traditional States Texas/Florida
% Traditional 85.9%
% Hybrid 11.7%
% Virtual 2.4%
High Hybrid States: NY/NJ/CT/RI/MA/DE/ME/VT/NH/PA
% Traditional 17.1%
% Hybrid 47.9%
% Virtual 35.0%
High Virtual States : CA/OR/WA/VA/MD/NM
% Traditional 3.9%
% Hybrid 9.5%
% Virtual 86.6%
6) We expect the "virtual" numbers to drop more gradually in the next few weeks and the hybrid numbers to increase the most as the areas left to return prefer that approach. Attention in the immediate term will focus on bigger cities and "Always Virtual" states and the role vaccination plays in near term re-openings. As noted in last week's newsletter challenges of getting high school students access to in-person learning and the timing and logistics of conversion from hybrid to traditional are going to emerge as Fall planning begins. As part of that, programs to address learning loss (a good national view provided in this Politico piece) and how they affect school schedules this summer and next Fall are going to become universal issues across the entire US K-12 educational system.

The continued drop in virtual this week was driven by grades 6-12 as the "Always Virtual" areas with long phase-ins offered in-person to more of...

This week we saw the biggest drop in "virtual-only" students since September as many districts returned to in-person learning after precautionary...