This week we saw the biggest drop in "virtual-only" students since September as many districts returned to in-person learning after precautionary holiday and Covid-related shut downs.  Progress will slow in the coming weeks and below we break down the parts of the country where the biggest challenges remain and take a look at national averages for students in grades K-5, 6-8 and 9-12.

Dennis Roche
Jan 24, 2021
This week we saw the biggest drop in "virtual-only" students since September as many districts returned to in-person learning after precautionary holiday and Covid-related shut downs.  Progress will slow in the coming weeks and below we break down the parts of the country where the biggest challenges remain and take a look at national averages for students in grades K-5, 6-8 and 9-12.
Burbio School Opening Tracker- Map

% US K-12 students attending "virtual-only" schools = 42% (from 49.6% last week)
% US K-12 students attending "traditional" In-person/every day" schools = 35.5%
% US K-12 students attending "hybrid" schools = 22.5%
The above percentages are set to Sunday, January 24th. Our data is presented as "students attending schools that offer this learning plan" - most districts also offer virtual even when providing in-person. For above, 42% of US K-12 students are currently attending schools that offer virtual-only plans, 35.5% offering traditional, etc.
1) During the Fall the number of US K-12 students attending virtual only schools started at a high of 62% at Labor Day, falling gradually to a low of around 37% by early November . Rising Covid rates and precautionary holiday related breaks concentrated in the Midwest and Northeast took that number back up to 55% the first week after the New Year. In the past week the "virtual" number fell to 42% as many schools that were in-person in November returned.
2) The largest groups returned in Maricopa County, AZ, El Paso County, TX, Kent County, MI, Fairfield County, CT, Morris and Bergen Counties, NJ, parts of Cook County IL outside Chicago, and Fulton County GA. Example cities returning included Stamford, CT and Syracuse, NY.. This coming week we expect a continued, but much slower, drop in the virtual figure as parts of Georgia, Colorado and Indiana return to in-person education, among others.
3) Breakdown nationally by school type: K-5 students are more likely to be in school in-person and it's a trend we expect to see get much more pronounced in the next two months. 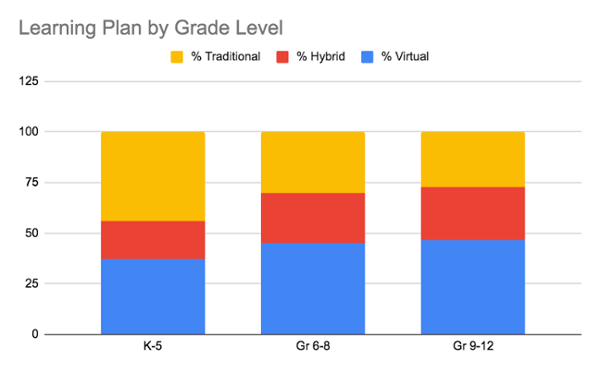 K-5 Students:
37.5% attending virtual-only schools
18.7% attending hybrid schools
43.8% attending traditional schools
Grades 6-8 Students
45.1% attending virtual-only schools
24.7% attending hybrid schools
30.2% attending traditional schools
High School Students
46.6% attending virtual-only schools
26.3% attending hybrid schools
27.1% attending traditional schools
4) In our January 4th newsletter we broke down regional learning preferences and noted just over one-third of US K-12 students had never been in the classroom this year and they are concentrated in two areas. We call them "Always Virtual": West Coast and the Mid Atlantic states plus metro areas outside those states such as Chicago, Philadelphia. Kansas City, Cleveland, Boston, plus smaller cities. These regions have a particular combination of state level regulations, logistical challenges and local stakeholder resistance that separate them from the rest of the country.
For example, currently less than 20% of K-12 students are attending in-person (either hybrid or traditional) schools in California, Washington, Oregon, New Mexico and Maryland, with only slightly more attending in-person in Virginia and Nevada. Conversely, 15 states have over 90% of their students attending in-person school (the purple parts of our School Tracker Map). Another 20 states have over 50% of students attending in-person, and many of these states would have higher in-person numbers if not for their urban areas that have never had students in the classroom.
Current plans to introduce in-person instruction in "Always Virtual" areas begin with K-2/K-5 and at risk students and are beginning to proceed this month in some larger cities and pockets of suburban areas
5) For the balance of the year we would highlight three bellwethers that are key to resuming normal education for K-12 students:
a) Progress in "Always Virtual" areas: For many school districts, introducing in-person is somewhat analogous to riding a bike. Once learned, districts make adjustments or stop and resume as needed. The districts returning this month know how to ride a bike. The Always Virtual areas haven't done it yet and to date have had quite a few false starts in the attempt to do so.
b) High school students and the balance of the academic year: Near team plans in Always Virtual areas start with K-2 or K-5 and in many cases don't mention high school students at all. We see the gap in in-person education access for high school students widening in the next two months and perhaps longer.
c) Hybrid districts converting to traditional: From our district auditing we observe general agreement that the hybrid learning format is suboptimal for teachers and students alike. States such as Florida, Arkansas, and Wyoming have over 90% of their students attending traditional, every day schooling with states like Texas and much of the Rockies not far behind. But states as varied as Delaware, Connecticut, Idaho, and Montana have over half their students attending hybrid schools and it's the dominant format in New York and New Jersey. Further, states such as Hawaii, Illinois, Massachusetts and Pennsylvania that are adding students to the classroom in the coming weeks are doing so in a hybrid format. While hybrid allows for spacing, conversion to traditional will involve adjusting Covid 19 policies that involve local health officials and state level political leaders.
6) In other trends, we continue to see districts in the Midwest formalize virtual learning as a permanent option for students. Dallas, TX schools are adding new calendar options for more classroom time to make up for lost learning, something we expect to see continue. In North Carolina, a state that has struggled more than most to introduce in-person learning, a group of parents from across the state sent a letter to the Governor asking for in-person learning. In Maryland Governor Hogan called on school districts to introduce hybrid learning by March 1st three weeks after a parents group had called for state level action.
Burbio data was featured in this recent piece in Bloomberg on the BIden administration's school opening plans, in addition to this November 20th overview of school closures in USA Today plus a recent segment on CNBC. about a rise in school closures. Burbio data has been cited in CNBC stories about racial inequality in education and the impact of virtual learning on retail sales. Axios led with the data in a piece on virtual learning glitches; Bloomberg in multiple stories as well as NPR Marketplace. Burbio has also been cited by The Information in a piece about Ed Tech, as well as CNBC in a piece about working parents and virtual education plus an NBC News piece about physical stress of remote learning on children and the USC Center for Health Journalism. The Baltimore Sun featured Burbio in a data on Maryland school openings and the New York Times in an op-ed about virtual learning and engagement. NPR highlighted Burbio data in a piece summarizing Fall school openings. and Axios featured Burbio in a piece about the instability of school openings. CNBC featured Burbio data in a piece about how disruption in K-12 education is affecting women in the workforce. CBS featured Burbio data in an interview with Dr. Anthony Fauci and Politico has featured Burbio data in a variety of pieces on national K-12 trends. Burbio data has been a resource for numerous government organizations, academic researchers, trade associations, think tanks and non-profits.

The number of students attending virtual dropped by 2.9% this week to 20.8%. Middle and high school students returned to in-person learning a bit...

This week the number of K-12 students attending virtual-only schools dropped to its lowest point since we began tracking the index as "Always...