The number of students attending virtual dropped by 2.9% this week to 20.8%. Middle and high school students returned to in-person learning a bit faster than elementary this week, reflecting "long phase-in" transitions that started in February. The percentage of students in traditional learning grew faster than hybrid (2.2% versus 0.7%) reflecting continued transition to traditional in places that had been hybrid. State level mandates will quicken transitions, but not for a few weeks, and this week we present a bar chart of our in-person index by state.

Dennis Roche
Mar 14, 2021
The number of students attending virtual dropped by 2.9% this week to 20.8%. Middle and high school students returned to in-person learning a bit faster than elementary this week, reflecting "long phase-in" transitions that started in February. The percentage of students in traditional learning grew faster than hybrid (2.2% versus 0.7%) reflecting continued transition to traditional in places that had been hybrid. State level mandates will quicken transitions, but not for a few weeks, and this week we present a bar chart of our in-person index by state. More below.
Burbio School Opening Tracker- Now Including State Averages

% US K-12 students attending "virtual-only" schools = 20.8% (from 23.7% last week)
% US K-12 students attending "traditional" in-person/every day" schools = 49.1% (from 46.9%)
% US K-12 students attending "hybrid" schools = 30.1% (from 29.4%)
The above percentages are set to Sunday, March 14th. Our data is presented as "students attending schools that offer this learning plan" - most districts also offer virtual even when providing in-person. For above, 20.8% of US K-12 students are currently attending schools that offer virtual-only plans, 49.1% offering traditional, etc.
1) The number of US K-12 students attending virtual only schools started at a high of 62% at Labor Day, dropped to just under 37% by early November, and rose back to 55% the first week after the New Year due to rising Covid 19 rates. The current "virtual' number sits at 20.8%.
2) Last week we highlighted the deliberate opening pace in California and we wanted to highlight what we see to illustrate the timelines outside of large cities.
3) We saw traditional transitions across the hybrid-heavy Midwest and Northeast. Cincinnati, OH schools will be traditional on March 31st and announced plans for full time in person next Fall. Waterbury, CT is moving to traditional this coming week, joining Hartford (K-9) and Stamford (K-8) as recent CT cities to make the move. Detroit, MI schools returned to traditional. Cherry Hill, NJ moved to traditional this past week and Keystone Oaks, PA school district converted half their grades to traditional this past week with the rest coming this week. Wappinger Falls, NY began traditional on March 8th and New Prague, MN converted to traditional last week. El Paso School District in Colorado Springs brought middle and high school in traditional this past week. Mundelein Elementary, a K-8 school in Illinois, brought K-5 in traditional last week and will bring 6-8 this coming week, one of several in-process or announced transitions in Illinois.
4) We saw more executive action at the state level. In North Carolina Governor Cooper signed a law to require all K-5 schools to be full time in person in three weeks, and middle and high schools to be at least hybrid. The New Mexico Department of Education announced a goal of having all schools in New Mexico "fully reopen" by April 5th. In Massachusetts where the Education Commissioner gained authority on school reopening, the Department ordered K-5 schools to be full time in person by April 5th,and middle school by April 28th. In Washington, Governor Inslee indicated he will make an emergency proclamation this coming week ordering K-5 schools to offer hybrid by at least April 5th and middle and high schools by April 19th. As noted last week, Oregon's Governor Brown ordered K-5 to be in hybrid by at least March 29th and 6-12 by April 19th, and we also noted the Governors of Arizona order all schools open by this coming week and a bill signed in Kentucky by the Governor ordering schools open by the end of March.
These state level directives (Iowa and West Virginia being two other examples since January) come in a variety of formats: bills from the legislature signed by the Governor, mandates by the State Department of Education, or Executive Orders from the Governor. We see immediate impact at the district level when these orders occur through references in Superintendent letters, accelerated learning plan introductions, and local board of education votes. We can see these tools playing a role in school planning for this coming Fall.
5) In January we started publishing a rolled up state index on our School Tracker and we have received several requests for a bar chart that illustrates the stages that various states are in. This "in-person index" is calculated by weighting the percentage of K-12 students in a state attending virtual schools at zero, traditional schools at 100, and hybrid districts at 50.

6) This past week saw a slightly faster increase in older students returning to the classroom. With the spate of K-5 in person state level mandates kicking for late March and early April across states with lower in person indexes we expect to see the "virtual" number of K-5 to drop precipitously by early April as only a handful of West Coast cities will be left not offering K-5 students any in-person options. 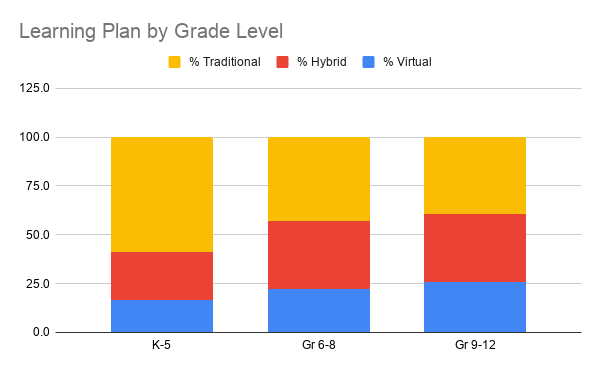 Transitions are almost complete and we expect the academic year to end with roughly 30% of US K-12 students attending either hybrid or virtual...

Week of 5/10: Cities and the Transition to Traditional

As the year comes to a close there are very few transitions - from virtual to in-person, or from hybrid to traditional - left to be made, so the...