Week of 2/15: Mapping the CDC Guidelines

This week the number of K-12 students attending virtual-only schools continued to drop, albeit at a slower rate than recent weeks as the part of the US left to open schools are in the "Always Virtual" areas that have struggled to offer in-person education and are going to be moving more slowly. The CDC school opening guidelines create a new regulatory dynamic around school openings that we discuss below in more detail as ninety one percent of US K-12 students attend school in the red tier.

Dennis Roche
Feb 14, 2021
This week the number of K-12 students attending virtual-only schools continued to drop, albeit at a slower rate than recent weeks as the part of the US left to open schools are in the "Always Virtual" areas that have struggled to offer in-person education and are going to be moving more slowly. The CDC school opening guidelines create a new regulatory dynamic around school openings that we discuss below in more detail as ninety one percent of US K-12 students attend school in the red tier.
Burbio School Opening Tracker- Now Including State Averages

% US K-12 students attending "virtual-only" schools = 33.6% (from 35.2% last week)
% US K-12 students attending "traditional" In-person/every day" schools = 40.8%
% US K-12 students attending "hybrid" schools = 25.6%
The above percentages are set to Sunday, February 14th. Our data is presented as "students attending schools that offer this learning plan" - most districts also offer virtual even when providing in-person. For above, 33.7% of US K-12 students are currently attending schools that offer virtual-only plans, 39.7% offering traditional, etc.
1) The number of US K-12 students attending virtual only schools started at a high of 62% at Labor Day, falling gradually to a low of around 37% by early November . Rising Covid-19 rates and precautionary holiday breaks concentrated in the Midwest and Northeast took that number back up to 55% the first week after the New Year. Since then we have seen an almost-universal return of schools that were in-person as of November. Further, in the last three weeks parts of the country that had been "Always Virtual" - never had students in the classroom - have started introducing students for the first time and as a result the national "Virtual" number is at its lowest point since we began tracking at 33.6%.
2) In "Always Virtual" areas Rochester, NY introduced students last week for the first time last week. Loudon County, VA is one of several VA districts planning returns in March . Some New Mexico schools began introducing in-person and we saw a bit of district movement in Washington, Oregon and California. Green Bay, WI, which two weeks ago said they would hold off in-person until three weeks after teachers were vaccinated, reversed course and will start sooner. In January Pawtucket RI schools voted to stay virtual for the year and this week they also reversed course and will begin returning students in March. Durham, NC school district, which had decided to stay virtual all year, is closely following a bill proceeding at the North Carolina statehouse that would require in-person learning within 15 days of passage.
3) As noted previously, we anticipate material changes to scheduling and learning next year outside of how in-person instruction is delivered. Dallas, TX, ISD stands out as a city district that has been in-person almost the entire year and has a range of plans in motion. They added an option for five extra weeks to the school calendar and created a "mitigating loss decision tracker" outlining different calendars for the next two years. In "virtual" news,Iowa City, IA created a permanent online school open to any K-12 student in Iowa. Two weeks ago we noted Sioux City, IA did the same thing. Iowa is a state that mandated in-person instruction, but the simultaneous introduction of state-wide virtual options would seem to create future flexibility
4) In big city news, a King County (Seattle) schools spokesperson indicated the district will not return any students older than grades K-2 to the classroom this year. New York City will open middle schools later this month and Philadelphia appears to still be on track to introduce children to the classroom later this month as well.
5) In the most important news of the week the Centers for Disease Control issued updated guidance that effectively nationalizes the discussion of school reopening by adding explicit community spread threshold benchmarks, prescriptions around things like when sports should be played, and emphasis on 6 foot physical distancing. The document creates four tiers of transmission - lowest to highest being blue, yellow, orange, and red. In the red zone middle and high schools should be virtual (K-5 would be hybrid) if schools can't implement expanded screening testing and in the orange zone hybrid would be recommended for all. For perspective, here is what a map of the US looks like right now based on the guidelines (red: virtual for middle and high school) 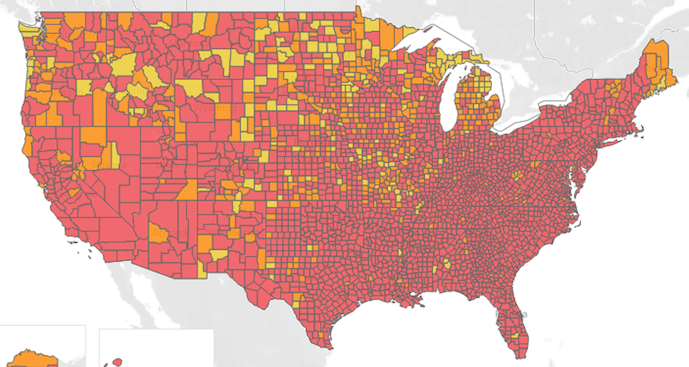 Source for above map here
And here is a map of where US schools are open: 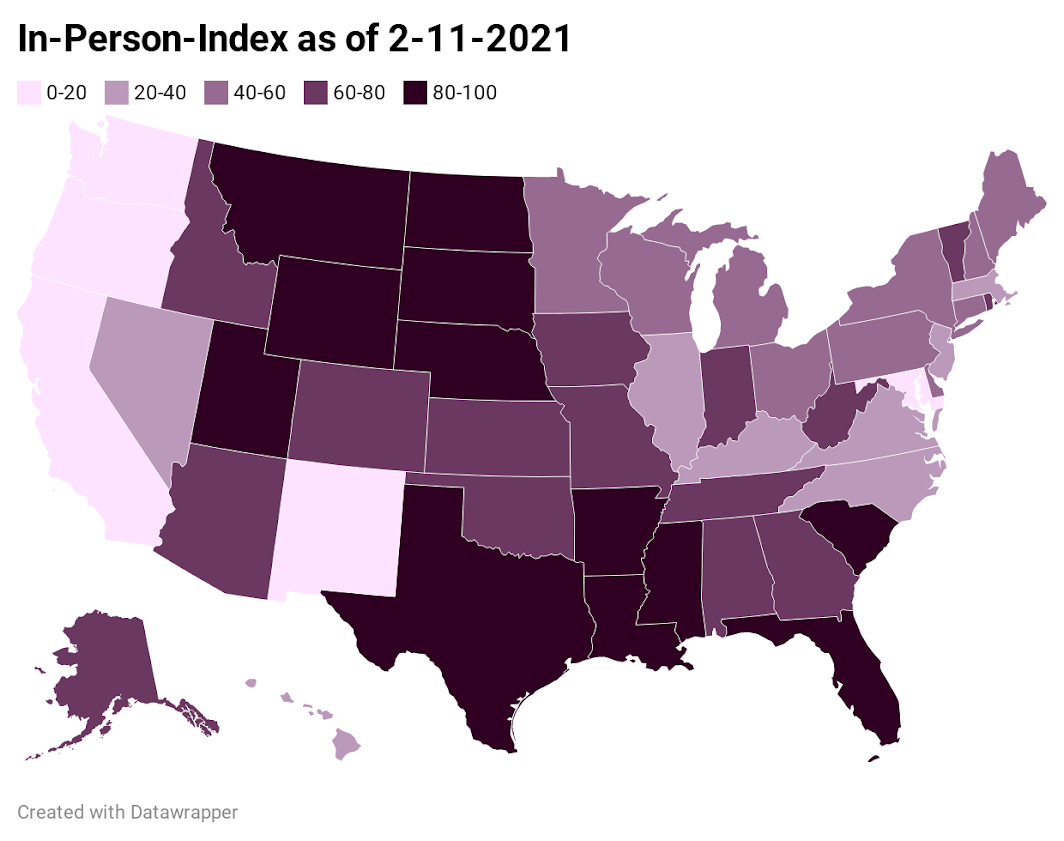 And here are the zones broken down by where US students currently go to school: 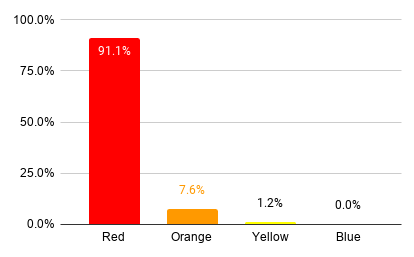 As indicated above 91% of US students overall are attending schools in the red tier. We calculate that 93% of the students currently attending "traditional" schools live in the red tier. The guidelines don't call for the closing of schools currently educating students in-person, but by following the CDC guidelines districts in "Always Virtual" areas will need to meet higher standards to introduce in-person learning than districts that have opened earlier this academic year. Further, as widely noted, the stipulation for six foot distancing makes planning for traditional in-person learning problematic.
Since August our auditors have collectively examined the 1,200 districts in our data set, which represent 35,000 schools, tens of thousands of times to monitor their status. A consistent observation is the seriousness with which Superintendents take guidance from the State and Federal level even as there has been continual adjustment and iteration to best practices. Based on our experience these CDC guidelines will generate immediate discussion as it relates to decision making for both the balance of the Spring and next Fall regardless of a school's current educational model.

As of this writing (Sunday, 11/15 at mid-day), NYC schools are still open. If they are shut down, the number of US K-12 students attending "virtual...